This was the first activation of YO/MC-158, or Chicioara summit. There are two important pieces of trivia regarding this summit: it is considered Romania’s highest hill, and it is actually located on private property. Some of you may see where this is going.

This summit is a very fitting detour from the Transfagarasan highway. Regardless of the direction of travel, you will be crossing Oestii Pamanteni; from there, you can follow the road through the village of Pleazna.

I abandoned the car at this fork and followed the forest track along the stream.

I followed the track along the valley to its end; this makes up most of the distance, but it is also the easiest part. Land lots to the left and right are usually private property, although they may not be clearly marked as such, nor fenced. However, most people use these lots for grazing, so the chance of encountering somebody along the way is low.

The end of the track is in a clearing, with two collapsed wooden sheds to the left of the track. 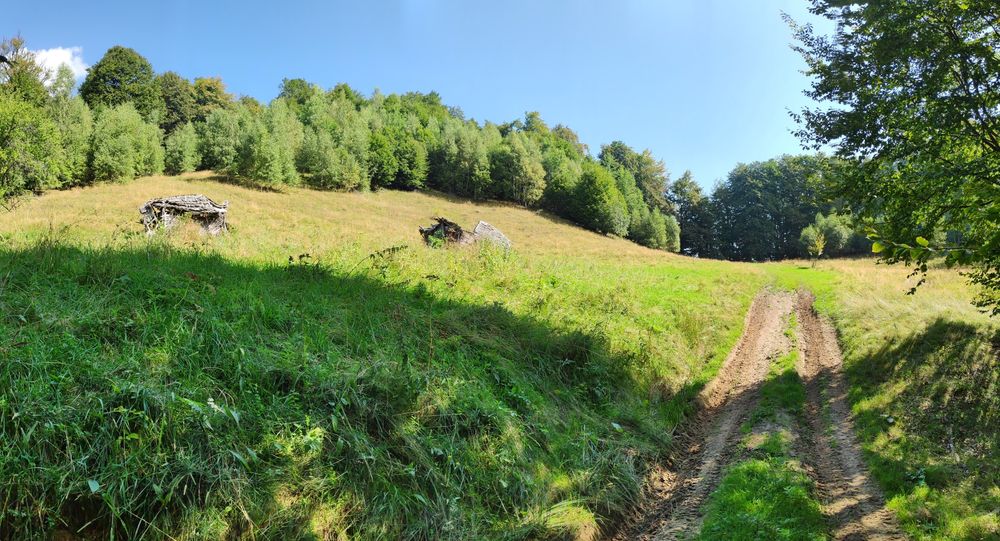 Keeping left along the sheds I identified another track that crossed a small patch of forest into the next clearing, and which further took me to a ridge, with land lots to the left and forest to the right. 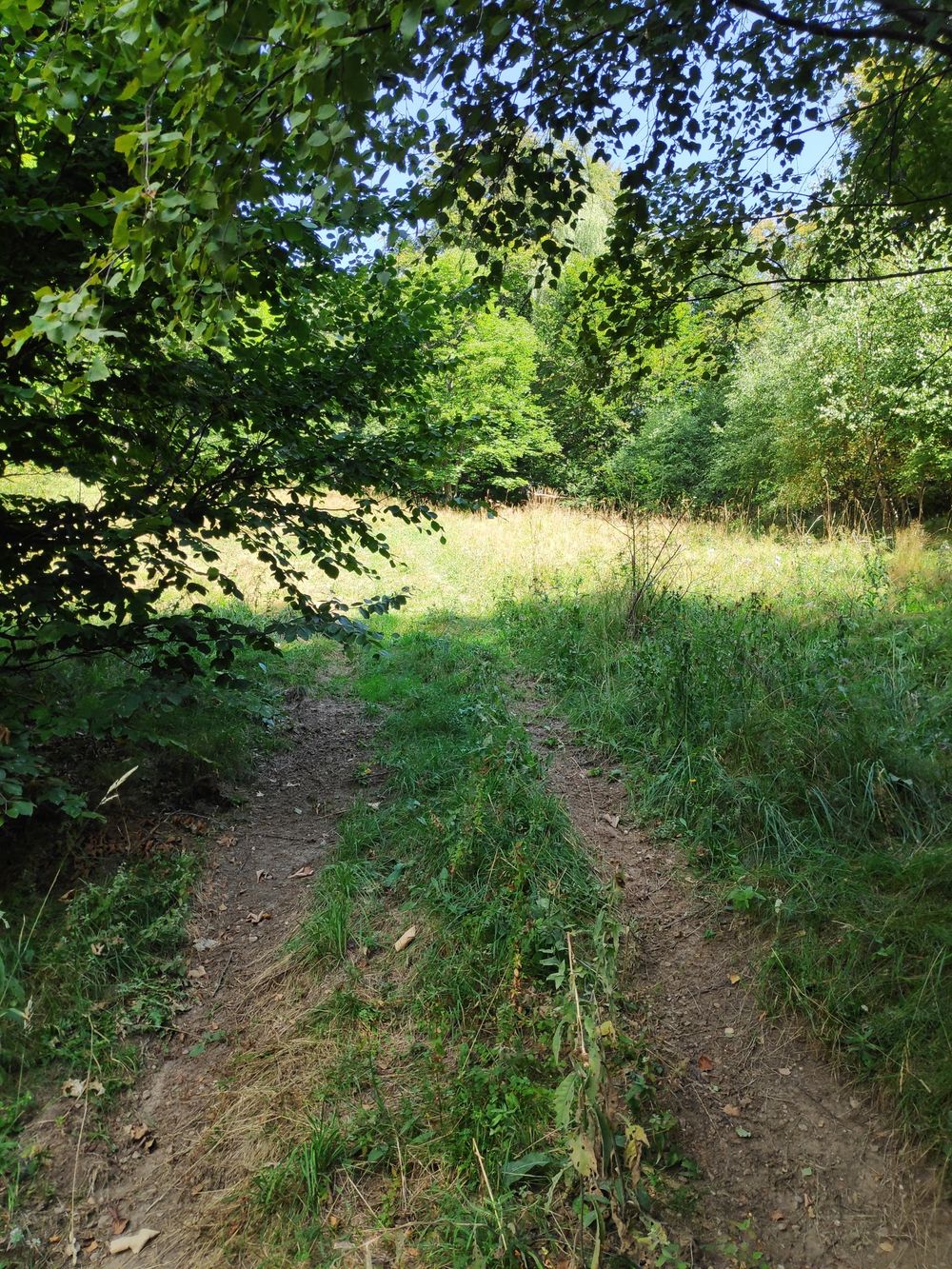 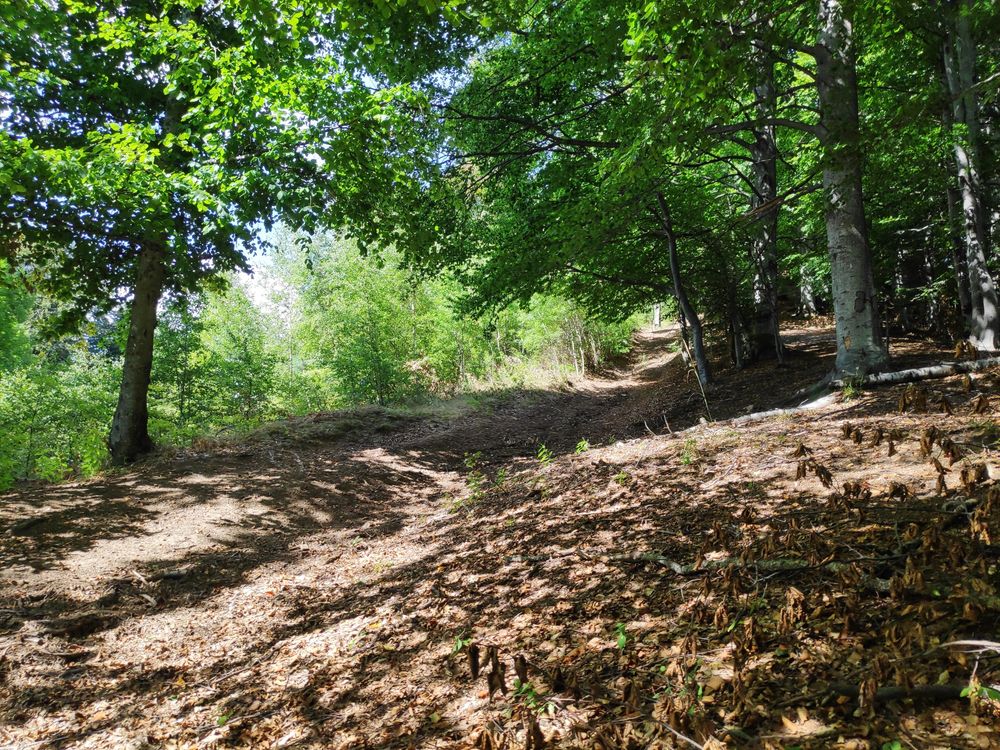 By following the ridge, I passed a peak and descend again to the limit of a well marked private property on which the summit is located. I believe the limit of the property is within 25 meters from the summit (vertically), so theoretically you could make your contacts without tresspassing.

Please note that this property is inhabited, and the people living there may not appreciate your presence there. For some reason this was not very clear for me at the time I arrived there, and I made my way towards the house only to be “greeted” by a person living there. 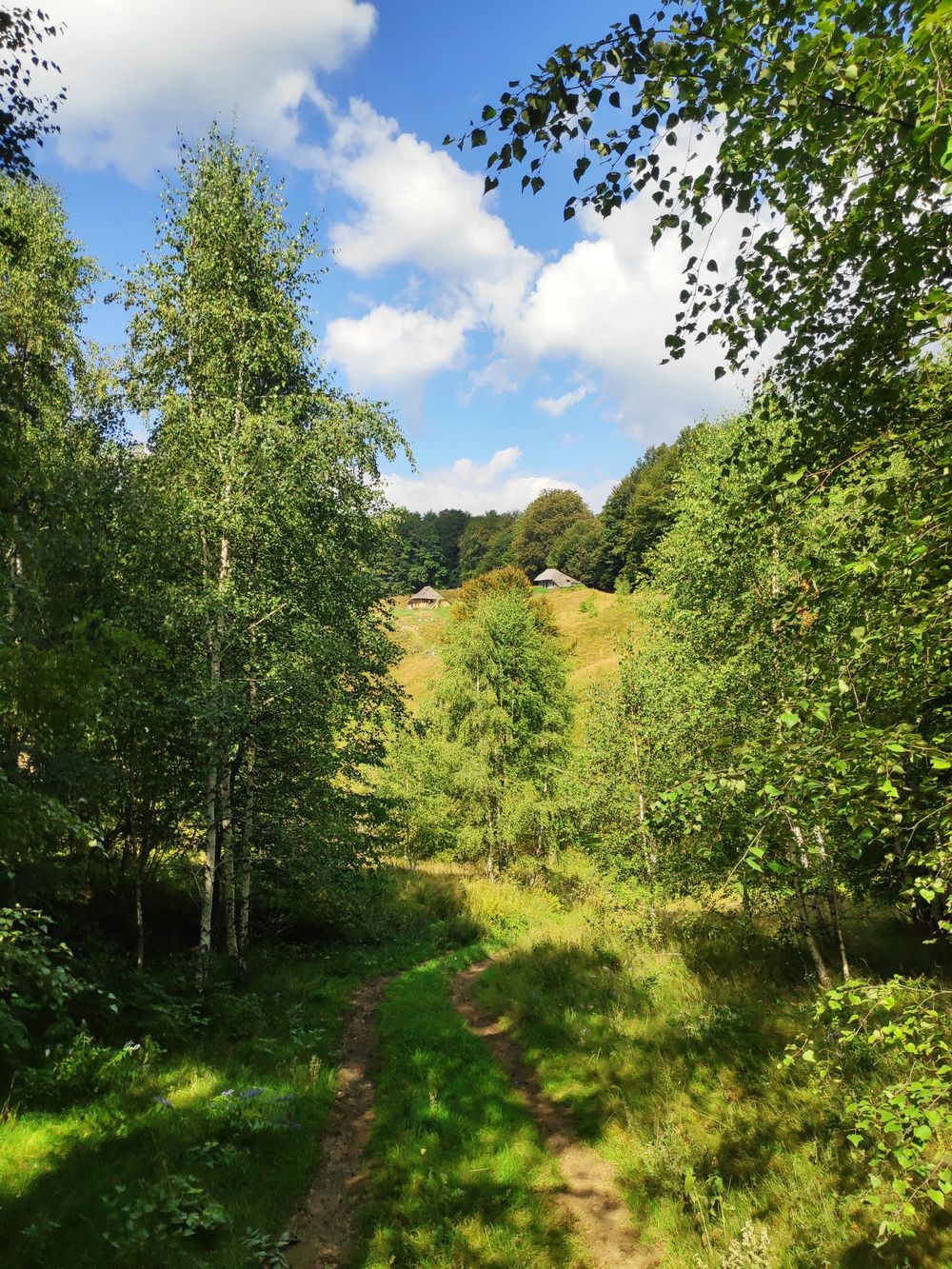 The upside is that he is a photographer/outdoorsman with a successful Youtube channel, so he kept an open mind to the whole “hey I want to set up an antenna and talk stuff into a mic” part of the story. So, while the initial conversation was a bit weird, he was a very nice guy and allowed me to continue to activate on the summit.

Please keep in mind that the place is not a tourist attraction, and he usually gets zero uninvited visitors. If you do want to activate the summit, it would be great if you hit him up with a message and politely ask, so that you don’t become an unexpected surprise (like I was).

I only worked 40m SSB for the summit, using my homemade inverted vee and my Yaesu FT-857d.

First contact was QRP at minimum power (5W), but then there was a bit of silence. I then upped the power to 10W and made three more contacts, one of which had a hard to understand callsign (but I managed to figure out afterwards).

While I had 4 contacts, I really wanted at least one more to account for a mistake; this turned out to be a good idea, as one of the previous contacts is most probably mistaken (or not on QRZ.com).

However, the wait was long, and I incrementally upped the power while calling CQ, until about 50W where I made the final burst of 3 contacts. While their reports were good (two 5/9 and one 5/7) and theoretically they would have read me fine QRP, it was rather reassuring being able to crank the power up, and still have 50W to spare.

The clouds were not looking that great, so after 7 contacts and a bit over one hour, I decided to pack up and leave.

First and foremost, I did not know my equipment well enough. I could have sworn that my backpack had a weatherproof bag built in, but in fact it did not. This made me a bit paranoid about the weather and cut short the time spent on the summit.

Second, I’m starting to think QRP SSB may not be viable for the current solar activity. This messes with my idea of buying a new QRP rig, in the sense that since phone may be too unreliable for the next 1-2 years, if I am going to learn CW then neither of my previous options make sense any more, and it may be wise to go with a cheaper and lighter CW-only rig. And, to be honest, homebrewing may not be out of the question.

Following the above logic, I’ve already ordered a QCX+ kit. This should give me a good idea of the innards, performance and limitations of a cheaper CW rig.

Speaking of buying things, the SOTAbeams Bandhopper 2 is on its way. Why 2? Because 3 was out of stock, and I was too lazy to build and tune it myself. For some reason I’ve only worked the 30m band once, and 20m/40m was always my go-to combo, so in some sense I don’t feel I’m missing out. I guess I’ll be able to convert it in the future with little fuss.

Another advantage of the Bandhopper is that it uses a fiberglass pole instead of a tree. So, besides the better range (I will be able to activate summits above the tree line), there will be less variance in the height of the feedpoint (and thus the feedpoint impedance). This will motivate me to dump the ATU from the setup, shedding even more weight.

I guess further experiments will tell if this makes sense or not, but I’m excited about future activations.